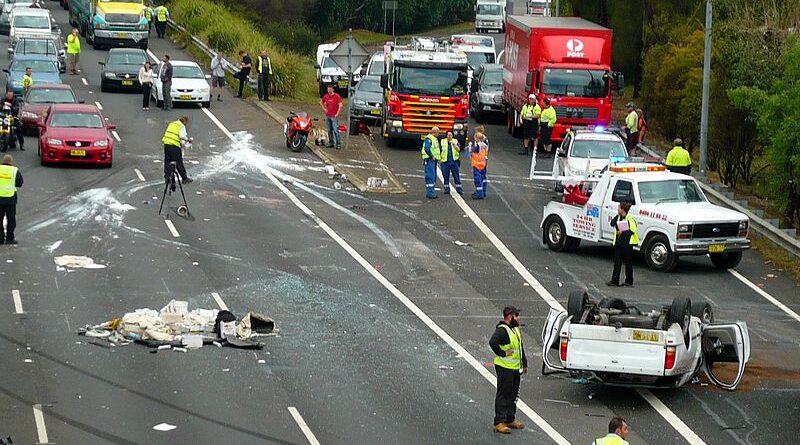 Mesa, AZ (March 2, 2021) – A serious car accident closed the westbound lanes of the Loop 202 Red Mountain Freeway at Dobson Road in Mesa on Tuesday evening. Per reports from authorities with the Department of Public Safety, the wreck occurred around 10:30 p.m. Officers with the Mesa Police Department received calls of a multi-vehicle crash around that time and arrived at the scene shortly afterward. First responders say that serious injuries were reported and officers closed the highway to [...]

Mesa, AZ – One Killed in Fatal Pedestrian Accident on US 60 at Dobson Rd

Mesa, AZ (March 2, 2021) – A pedestrian has died after being hit by a street sweeper on westbound US 60 near Dobson Road on Tuesday morning. Per a report released by the Arizona Department of Public Safety Sgt. Kameron Lee, the accident happened just after 5:00 a.m. The right lane of the US 60 westbound remained closed as DPS collected evidence at the scene. Officers with the Mesa Police Department were also dispatched, as well as first responders. The [...]

Mesa, AZ (March 1, 2021) – A multi-car accident on US 60 near Alma School Road resulted in at least one injury on Monday morning, March 1. According to officers from the Mesa Police Department, emergency crews and local authorities were called to the scene near Alma School Road around 7:00 a.m. Authorities say a sedan was traveling westbound on US 60 when it collided with another passenger vehicle in the HOV lane, causing an accident that may have involved [...]

Phoenix, AZ (March 1, 2021) – A crash involving at least two vehicles shut down the right westbound lanes of Interstate 10 near 16th Street in the greater Phoenix area on Monday morning, resulting in injuries. According to local officers and fire rescue units, the accident happened just after 6:30 a.m. in the right lanes of the interstate. The Arizona Department of Public Safety said that it appears that a box truck collided with at least one other vehicle in [...]

Phoenix, AZ (March 1, 2021) – The southbound lanes of State Route 51 at Bell Road were closed for a serious overnight crash on Sunday, February 28, according to officials with the Arizona Department of Transportation. Officers with the Phoenix Police Department were dispatched to the area of SR 51 near the Bell Road exit around 12:30 a.m. The highway was closed for nearly seven hours as first responders worked to treat injured victims and police conducted the on-scene portion [...]

Tucson, AZ (March 1, 2021) – A serious crash left at least one person injured on Saturday evening in Tucson. Troopers with the Arizona Department of Public Safety said that the accident took place at the intersection of North Stone Avenue and East Glenn Street around 7:00 p.m. Officers from the Tucson Police Department stated that the area was shut down while they investigated and cleared the scene. It’s unclear how the crash occurred at this time, though police say that [...]

Tucson, AZ (March 1, 2021) – Eastbound 22nd Street was shut down after a pedestrian was hit and seriously injured by a vehicle on Monday morning, March 1. According to reports from officers with the Tucson Police Department, the accident occurred on 22nd Street between 3rd and 4th Avenues. Officers were dispatched to the area around 10:00 a.m., along with first responders who transported the victim to an area medical center in serious condition. Details about their identity and the [...]

Phoenix, AZ – Injuries Reported in Multi-Vehicle Wreck on I-17 at Dunlap Ave

Phoenix, AZ (February 28, 2021) – Injuries were reported after a crash on Interstate 17 at Dunlap Avenue on Sunday afternoon. Officials from the Phoenix Police Department said that the wreck occurred just before 1:30 p.m. and involved multiple vehicles. The wreck closed the right lane near the Dunlap off-ramp. It’s unclear how the accident occurred, though officers and fire rescue units were dispatched to the scene shortly after the wreck occurred to collect evidence and treat injured victims. At this [...]

Mesa, AZ (February 28, 2021) – A serious crash closed the left lane of the Loop 202 Red Mountain Freeway near Williams Field Road on Sunday afternoon and appeared to result in at least one injured victim. Per reports from the Tempe Police Department, the crash happened in the westbound lanes of the freeway around 4:30 p.m. Footage from Arizona Department of Transportation cameras showed multiple first responders at the scene of the accident. Traffic was backed up for several miles [...]